7 Most Important Differences Between Fibromyalgia And Rheumatoid Arthritis

Fibromyalgia and rheumatoid arthritis are common joint and bone diseases that are sometimes misdiagnosed. In this article, 7 main differences of these diseases are stated that doctors can easily diagnose the disease because of these differences.

What Are Rheumatoid Arthritis And Fibromyalgia?

It is best to briefly look at these two diseases before discussing the difference between rheumatoid arthritis and Fibromyalgia.

Rheumatoid arthritis is an autoimmune disease in which your immune system targets your healthy joints and organs. This causes inflammation, pain, and damage.

Fibromyalgia is a condition that causes extensive musculoskeletal pain and tiredness, sleep, cognitive, and mood problems. There is currently no known definitive cause, but certain external factors, including genetics and stress, may predispose a person to the condition.

Fibromyalgia has many of the same symptoms as arthritis. Joint and muscle pain, low energy, fatigue symptoms, loss of sleep, and stiffness are common to both conditions. Both conditions cause inflammation, which can make it difficult for the body to move. People with Fibromyalgia sometimes report bad feelings when they are around people who seem happy and active. However, the two conditions are very different, and symptoms will probably vary in frequency and severity for each condition.

Can Fibromyalgia Be Mistaken For Rheumatoid Arthritis?

In a recent study from the University of Illinois' College of Medicine, researchers have found that Fibromyalgia and Rheumatoid Arthritis are often misdiagnosed. Of the 495 patients involved in a study, over half (52.3%) had been misdiagnosed with Rheumatoid Arthritis. In contrast, only fifteen percent had been diagnosed with Fibromyalgia. This inaccuracy is probably because Fibromyalgia and rheumatoid arthritis are so similar that the term "fibromyalgia" does not accurately describe its diagnosis or treatment. The classification of Fibromyalgia as a chronic disease is currently not recognized by the American College of Rheumatology. However, the condition is recognized by the World Health Organization (WHO) and the United States Department of Health and Human Services. 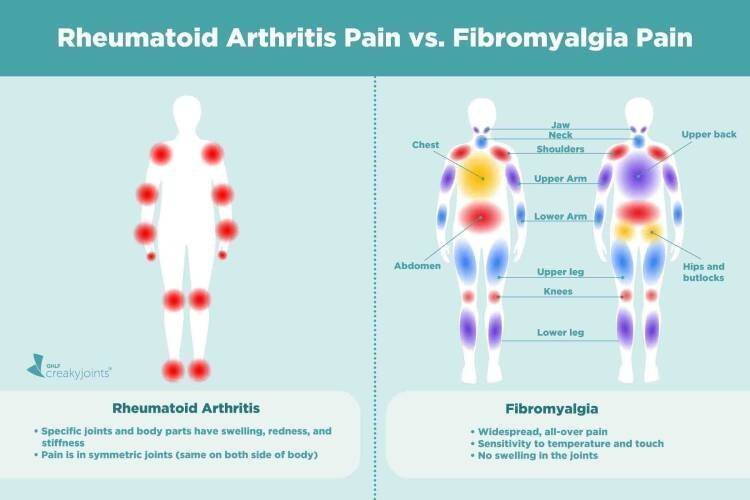 Can Fibromyalgia and arthritis be completely different things? Not necessarily. Like a pinata can be made out of several different kinds of rice, each condition's exact causes and symptoms can vary. It is also possible that there are no true differences between Fibromyalgia and arthritis - but rather that both are symptoms of different underlying causes. For instance, Fibromyalgia is often caused by an imbalance of the central nervous system. However, the cause of arthritis can be due to many different things, such as age, genetics, and other internal and external factors. Here are some key differences between the two conditions:

There are many differences between Fibromyalgia and rheumatoid arthritis. The most noticeable of those differences is the fact that Fibromyalgia is a chronic disease which means that it requires ongoing treatment. While rheumatoid arthritis typically appears in the later years of life, it can also occur in early childhood and even in infant years. With Fibromyalgia, on the other hand, the effects of the disease tend to be long-lasting and irreversible.

One of the important differences between Fibromyalgia and rheumatoid arthritis is that pain is a part of the disease. Most people with Fibromyalgia tend to experience widespread pain throughout the body on most or all days. This pain is often described as a dull ache that occurs mainly at night or when sleeping. Fibromyalgia patients can also have a fever and some weight gain.

Joint discomfort associated with RA can range from minimal to moderate to severe, depending on the individual. Arthritis pain is not widespread and is concentrated in specific areas such as the hands, wrists, knees, and feet. It might sometimes seem as if you've twisted your ankle or fractured your bone. Parts of your body may be so sensitive that you can't even touch them. You may ask: which is worse? Fibromyalgia or rheumatoid arthritis? Patients and doctors have different opinions on this question. But in general, it is said that arthritis pain can be quite severe. Doctors also believe that Fibromyalgia worsens the pain of arthritis.

How The Pain Messages Are Delivered To The Brain

Doctors also say that the difference between the two diseases is how the pain messages are delivered to the brain. Fibromyalgia, they say, is characterized by widespread pain that is "varying in intensity." With Rheumatoid arthritis, the messages are the same, but the delivery is more directional - "I'm getting painful here" or "I'm getting hurt here."

Fibromyalgia discomfort may arise in the joints and muscles; however, Fibromyalgia does not destroy your joints as severely as arthritis. It also does not affect your muscles or other soft tissues. Another difference between Fibromyalgia and rheumatoid arthritis is that the former does not usually cause deformity or severe disability.

Healing From The Disease

One of the more obvious differences between Fibromyalgia and arthritis is the fact that fibromyalgia patients do not heal from the disease. This is in contrast to arthritis, which generally allows for the gradual healing of the tissues surrounding the joints. However, the pain associated with Fibromyalgia can also be quite severe. It is not uncommon for someone who suffers from this condition to experience various symptoms, ranging from mild to excruciatingly severe. In addition, there is a lack of common pain killers like ibuprofen or acetaminophen that are commonly prescribed for arthritis.

The Areas Of Treatment

There are also several differences in the areas of treatment between Fibromyalgia and arthritis. Most medicines prescribed for arthritis are aimed at reducing pain, swelling, and the ability to focus. However, most fibromyalgia treatments focus on the ability to sleep. For both conditions, painkillers are also sometimes prescribed. Since Fibromyalgia can involve multiple body areas, various medications are often needed to achieve a complete cure.

Since both Fibromyalgia and rheumatoid arthritis typically last for a few years, treatment options for this condition are much the same. Many times patients choose to take an anti-rheumatic medication such as an anti-inflammatory or an analgesic. To prevent the onset of further symptoms, it is important to eat a healthy diet, get plenty of sleep, and exercise regularly. These steps can help control symptoms to a point where patients can live a more normal life.

The Cause of Disease

Unlike arthritis, most specialists believe that the cause of Fibromyalgia is neurological. Because this type of disease is not linked to any specific reason, doctors are unsure what causes it. Since it has been seen to run in families, it is possible that some people may have it and not know it. Scientists have found that hereditary issues could be one of the causes of this disease and poor diet, stress, and traumatic experiences.

In addition to differences in the symptoms experienced by patients with these diseases, their severity can also vary greatly. Fibromyalgia is more common in women than men; however, this is not the case with arthritis. This is why you should seek the advice of a qualified healthcare provider before self-diagnosing the symptoms associated with either condition.

Can You Have Fibromyalgia And Rheumatoid Arthritis Together?

Therefore, there is a great need for effective ways to determine the early signs of these diseases. These diseases are very frustrating to live with. Patients must endure the painful symptoms of Rheumatoid Arthritis and Fibromyalgia in addition to the added challenges of chronic pain due to inflammation. These diseases can have an enormous impact on quality of life. Because of the symptoms and complications associated with Rheumatoid Arthritis and Fibromyalgia, a positive diagnosis is imperative to allow patients to be treated early for any complications.

Patients are suffering from Rheumatoid Arthritis and Fibromyalgia experience various symptoms, including joint pain, tenderness, extreme fatigue, limited ability to perform physical activities, sleep problems, nausea, fatigue, and difficulty breathing. Fibromyalgia sufferers may also report feelings of depression and frustration, and difficulty concentrating. These debilitating conditions can significantly impact the quality of life and should be appropriately diagnosed and treated.

What causes coccidiosis and how can you get rid of it?
Read More

Familiarity with the dangers of the nursing profession
Read More

A variety of health services and health
Read More

Fibromyalgia: What You Should Know About It
Read More