Most common types of orthopedic implants 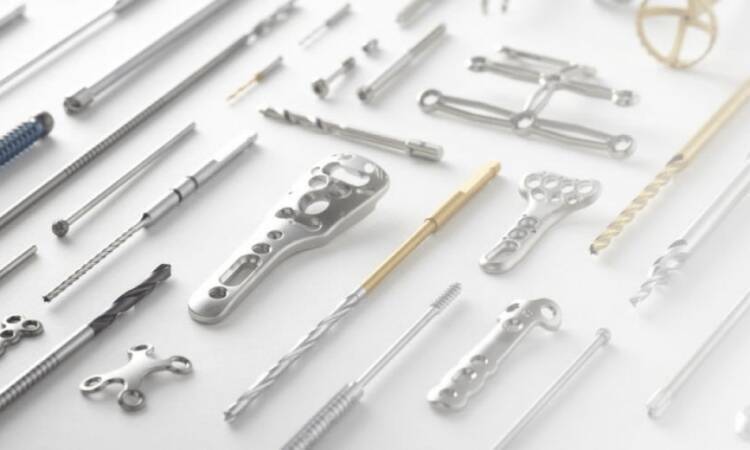 Most common types of orthopedic implants

Orthopedic implants are medical devices used to provide fixation for the bone. In this method, surfaces of the joints are replaced in the human body using these implants. They also help surgeons to replace, fix and even strengthen joints in the damaged areas. Because of the complications of this type of surgery, only highly skilled surgeons, specialized in this particular field, perform orthopedic implants.

When there is a cartilage loss, there can be pain and problem with the joint movement because of the friction between the joints. Overweight individuals, athletes, or people who overuse their joints for whatever reason are at the risk of cartilage loss. There are certain areas which are mostly affected by the loss of cartilage like knees, elbows, shoulder and hip joints.

When other treatments fail to cure the patient, the doctors opt for the process of orthopedic implant replacement. In order to make the joints move freely and to reduce the pain in the joints, orthopedic implants are fixed to replace the fractured joints.

For inserting and placing the implants in the right position inside the body, many orthopedic instruments are utilized. These include pins, wires, external fixators, plates, cannulated screws, and crania.

The three most common types of orthopedic implants which are removable as well as non-removable are screws, plates, and prostheses.

The main and primary function of the screw which is used for the bone is to produce compression which will help the bones mend in the injured area. There is no difference between a normal screw and an orthopedic screw, they both have a body as well as a head.

The head is mainly used to insert the screw in the bones, and the length of the screw is measured from the top to the bottom.

Screws com in different sizes and forms, and are used for a variety of purposes. For example, reduction screws can be 4.5 to 8.5 millimeters thick.

There are many means for the plates to be fixed perfectly and be effective. The plate should have an appropriate thickness and a proper width and it must be adequate to hold both sides of the fractured bones. The plate must control and neutralize all forces such as bending, compression etc. Thanks to this function, in surgeries like the pectus excavatum correction, pectus bar plates are used. The plates can also be used in tibia and femur.

Prostheses is an artificial body part, that can be a limb, the heart, and even an implant of the breast. Prosthesis is removable in nature and has been used for years throughout the history of human kinds. The Egyptians were the first nation who performed the surgery.

C-leg prosthesis: This is a traditional process, which replaces the missing arm from under the elbow with an artificial limb.

Trans humeral prosthesis: It is the artificial prosthesis limb that replaces the missing arm above the elbow.

Transtibial prosthesis: It is the artificial prosthesis limb which replaces a missing leg, right below the knees.

Transfemoral prosthesis: This kind of prosthesis is a limb which is replaces the missing leg above the knees.

What are the implants made of?

Properties of orthopedic implants must ideally make the pieces chemically inert and absolutely biocompatible. Also, it must have a great strength, and a reasonable price so that it will be affordable by all. Another important feature is that it must be resist wearing for a long time.

Orthopedic implant materials that are manufactured are of three categories which are currently used in prosthetic devices, such as metals, polymers and ceramics.

These metals include surgical grade stainless steel, pure titanium and cobalt-chromium. For non-permanent implants, stainless steel is used. Cobalt-based alloys were used long back even prior to the use of titanium in the orthopedic implants.

In addition to this, most of the implants are stainless steel or titanium alloys. Titanium is widely used as it is light in weight and has a long-lasting duration, approximately 20 years, but since it is expensive, it is not affordable by everyone. Other metals such as gold and steel were previously used, but none of them lasted as long as the titanium implants. As such, titanium is used to make many surgical devices such as forceps, tweezers, scissors, vena cava clips, laser electrodes and many more.

Polymers are made by chemically processing and linking of monomers. In the case of an organic polymer, the center is a carbon atom. There are polymers which are mostly and widely used in orthopedics. One such polymer is the ultra-high or high-density polyethylene. This makes polyethylene one of the best materials with metal and ceramic.

Despite their usage, a number of problems have been reported with polymers. They are slow and temperature sensitive. Also, polymers have a progressive wear and may suffer under the load. This kind of substance is commonly called creep. The creep’s strength can be increased and improved. An example is Polymethylmethacrylate, which is widely and commonly used in the process of implant. This is a bone cement, which is relatively weaker than cortical bone, with respect to all mechanical properties.

In the orthopedic implants, the ceramic which is used in the process, contains aluminum oxide and calcium phosphates. The ceramic material is very resistant to compression but becomes weak and brittle under pressure and tension.

Usually, calcium phosphate ceramics are used. Their popularity is owing to the fact that they have high biocompatibility. Other ceramic materials such as zirconium oxide and silicon oxide are most commonly used these days.

After the implant is installed, the patient will experience pain and discomfort for few days but it will get better gradually. Taking pain killers which are prescribed by the surgeon will be helpful, but the dose and amount of the used medicine should be decreased gradually.

There will be swelling post-surgery in the area where the implant has been installed. This is a common issue and there is nothing to worry about. One of the prescribed methods to reduce swelling and pain is applying ice packs for few weeks after the surgery, about 10-20 minutes per day. Another post-surgery care point to remember is that as smoking doesn’t do good to the lungs, it doesn’t do good to the healing of the bones either. Therefore, smoking should be stopped.

This was a brief attempt at describing orthopedic implants. On Monib Health’s website, you will find comprehensive information on the variety of surgical implants available and their particular usage.

where i can find the name list of orthopedic implants ?

You can find our orthopedic implant products here: https://monib-health.com/en/products

Nice comments......
Dr Shahid Noor plan my implant surgery on next Thursday inshallah. There is Gian cell Tumor in my left Knee.

Why back surgery should be avoided?
Read More

Which Is The Best Orthopedic Distributor In our country?
Read More

How long do metal implants last in the body? The question you should ask before implant placement
Read More

What You Should Know About Titanium Orthopedic Implants
Read More