Chemical disinfectants used in hospitals are intended to kill bacteria, fungi and contaminants, but they are the same substances cause other problems. Read the types of chemicals along with the advantages and disadvantages of each in this article.

Various chemicals are used in hospitals to disinfect surfaces or hands. Some of these chemicals are more effective against bacteria, germs and spores than others, and some are less effective. Choosing the right chemical germicide requires understanding how it works, the advantages and disadvantages of different types of chemical disinfectants used in hospitals. These are the details that we will address in this article.

Chemical disinfectants used in hospitals for sterilizing surfaces are divided into three general categories based on their effectiveness.

High level disinfectants are the most used among disinfectants because they will have the highest effectiveness. They kill most germs.

There is a water-based solution called formalin which contains 37% formaldehyde in terms of weight. This chemical solution is used as a surface disinfectant. Formaldehyde in liquid and vapor conditions at low temperatures has the effect of bactericide, fungicide, virucide and anti-spore.

The action mechanism of this chemical is attributed to its interactive properties and transverse bonding with proteins, DNA and RNA, leading to disruption in DNA synthesis. It can also penetrate the hogs of bacteria.

Formaldehyde along with alcohol is traditionally used to sterilize equipment such as surgical instruments and hemodialyzers. Paraformaldehyde (the formaldehyde solid polymer) in combination with low temperature vapor is also used to disinfect heat-sensitive appliances.

However, formaldehyde consumption can be fatal and prolonged exposure to this chemical causes respiratory problems such as asthma and skin irritation (dermatitis and itching). Due to the risks of formaldehyde application and its potential carcinogenic effects, its use has recently been limited. 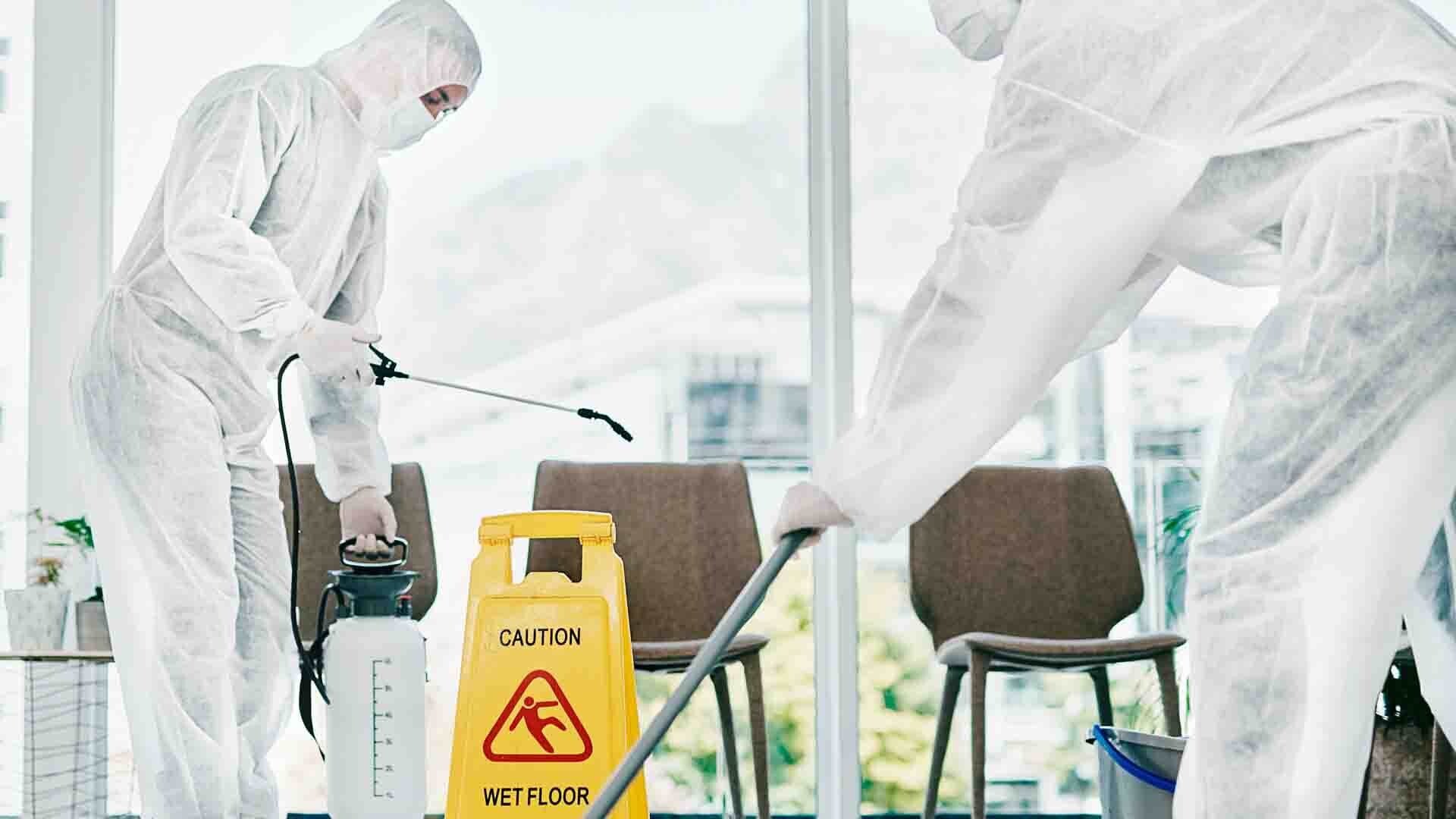 Glutaraldehyde is a saturated dialdehyde and a high-impact chemical disinfectant used to clean surfaces. This disinfectant has antibacterial, anti-spore, antifungal and antivirus effects. For this reason, it is a good choice to sterilize surgical equipment, spirometry tubes, dialyzers as well as endoscopic and respiratory treatment equipment at low temperatures.

Glutaraldehyde also destroys mycobacteria. This chemical has a good use-life while it is a strong germicidal. But it must be a completely safe environment to use it because exposure to it, stimulates the skin and mucous membranes and causes numerous pulmonary symptoms such as asthma and allergic rhinitis.

Since the introduction of ortho-phthalaldehyde (OPA) in 1999, this disinfectant has been a reliable alternative to glutaraldehyde. OPA has more anti-mycobacterial, antibacterial and anti-spore activity compared to glutaraldehyde. Its stability is higher at different pH amplitudes and has a lower risk when used. It is not the stimulant of eyes and nasal ducts, it has little odor and does not require activation. Of course, it costs three times more than glutaraldehyde.

Oxygenated water is a disinfectant solution with 7.5% hydrogen peroxide that has been approved by the FDA to sterilize and disinfect surfaces in sanitary environments. Hydrogen peroxide attacks and destroys membrane lipids, DNA and other essential components of the cell by producing destructive hydroxyl free radicals. It affects a wide range of microorganisms, including bacteria, yeasts, fungi, viruses and spores.

The disinfectant, antiviral, antifungal and anti-yeast properties, along with excellent stability and environmentally friendly properties have made hydrogen peroxide used as a high-impact disinfectant. 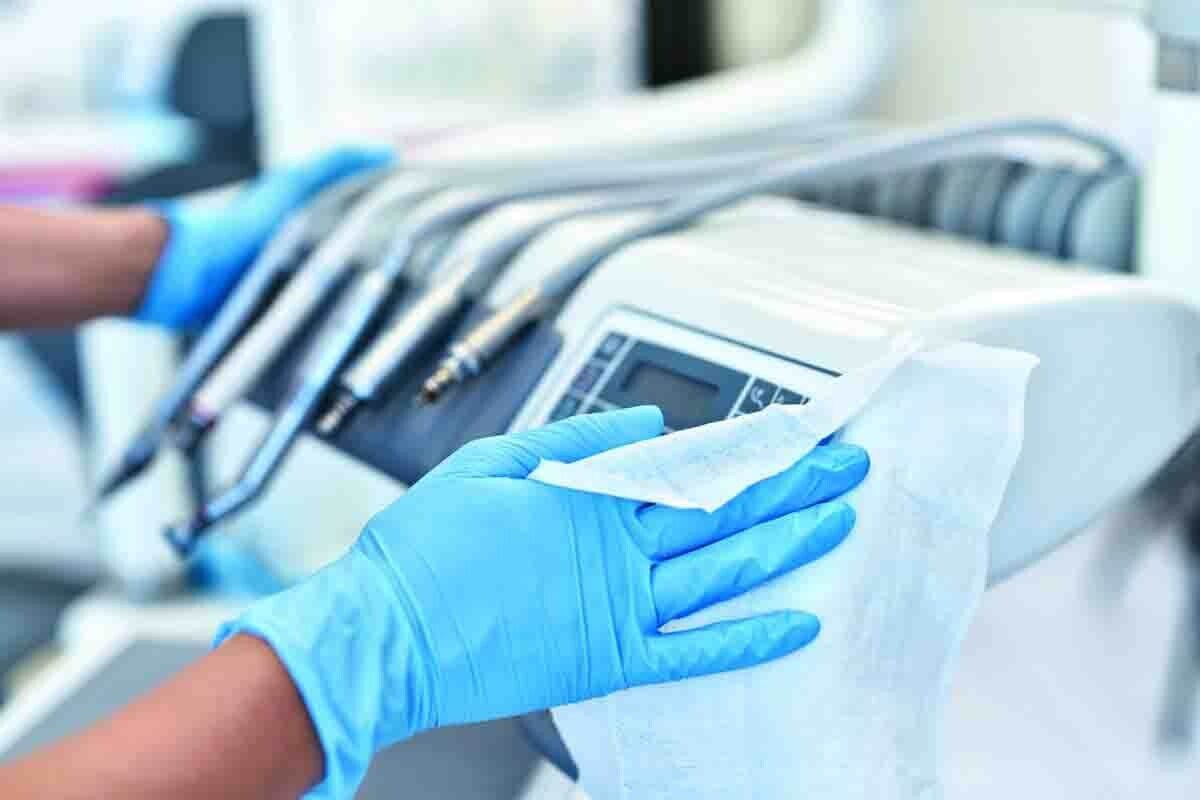 Another new emerged option of ethylene oxide and aldehyde disinfectants is peracetic acid. Peracetic acid-based solutions are stronger disinfectants than hydrogen peroxide. In low concentrations, they have anti-spore, bactericidal, virucidal and fungicidal properties. They are environmentally friendly. For this reason, traditional disinfectants have been replaced with them for medical, dental, endoscopy, dialysis and hemodialysis equipment.

There is little information on the action mechanism of peracetic acid, but its function is believed to be similar to other oxidizing agents, meaning it disrupts the permeability of the cell wall and destroys sulfhydryl and sulfur bonds in proteins, enzymes and other substances.

Hypochlorites with the most common use of chlorine disinfectants, are available in the liquid or solid forms. CRA sodium hypochlorite is one of the most popular disinfectants of surfaces contaminated with blood containing the Human Immunodeficiency Virus (HIV) or hepatitis B virus. This disinfectant performs a wide range of antimicrobial activities with low toxicity and low cost.

Sodium hypochlorite is a highly active oxidizing agent that destroys the cellular activity of proteins. High concentrations of this disinfectant show good anti-spore and antivirus activity. 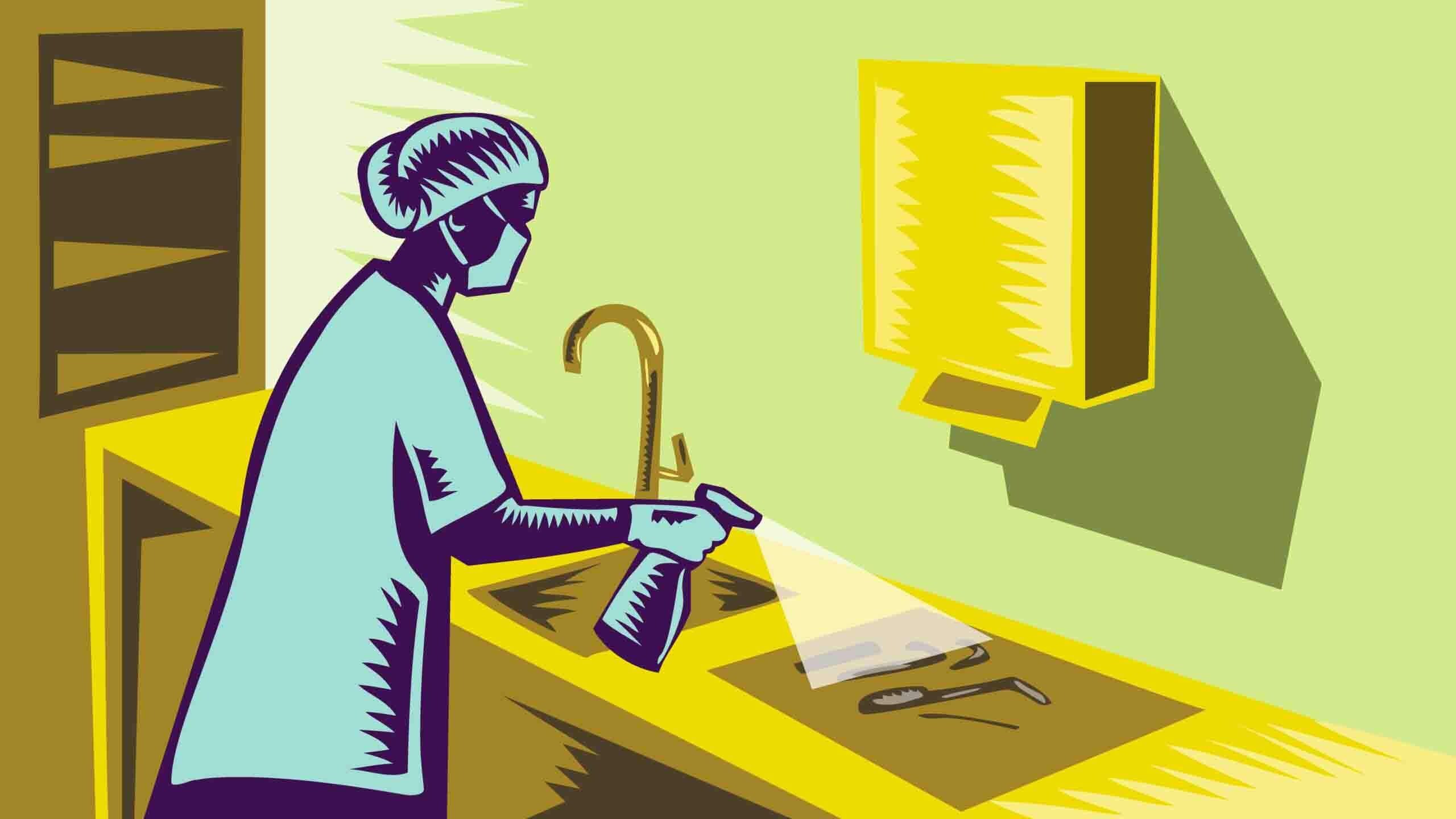 Iodophors are also used as surface disinfectants. Iodine has bactericidal, fungicidal, virucidal and anti-spore properties. It rapidly penetrates the cell wall of microorganisms and makes the effect by disrupting the structure and synthesis of proteins and nucleic acids.

Iodophors, such as povidon-iodine and poloxamer-iodine, have fewer stimulating properties and have better germicidal action than aqueous iodine solutions. Of course, the FDA does not consider any type of Iodophors as the main disinfectant, but it is nevertheless used to disinfect blood culture bottles and medical equipment such as thermometers and endoscopic devices. 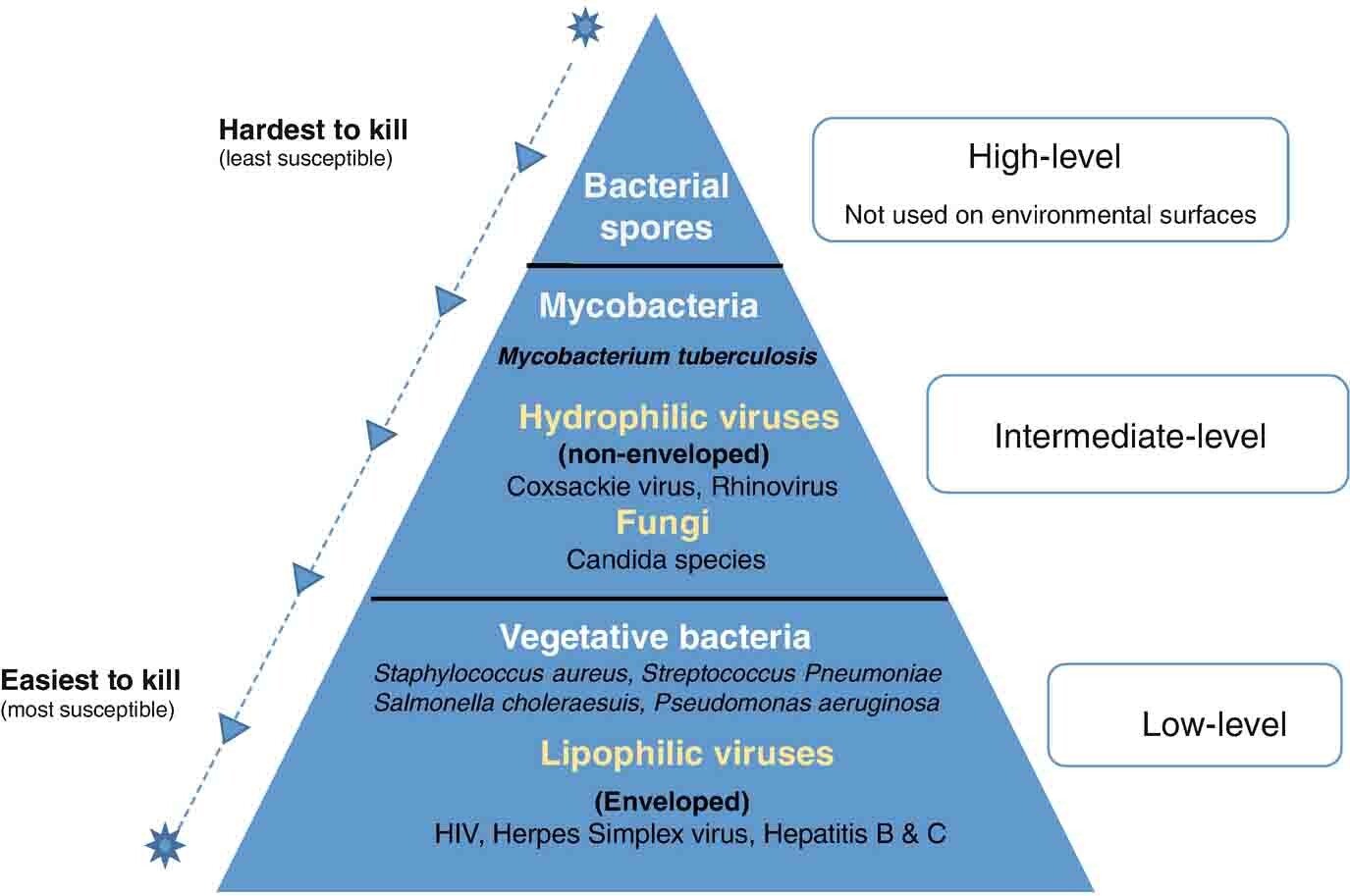 Low-level disinfectants are one of the most common ways to clean, and disinfect surfaces. These substances can kill most bacteria, some fungi and some viruses over a certain period of time (less than ten minutes).

In the health care debate, the chemical composition of ethyl alcohol and isopropyl alcohol, which is soluble in water, is said alcohol which has germicidal properties. Alcohols have rapid bactericidal properties, in addition to fungicidal and virucidal ones, but don't kill bacteria spores. The appropriate concentration for antibacterial activity of alcohols is between 60 and 90 percent and if diluted to reach the concentration of 50% and less, its effectiveness decreases.

We suggest you read this article as well: the problems hospital detergents cause for nurses

Methyl alcohol (methanol) has the weakest antibacterial effect among alcohols and is therefore rarely used in health centers and hospitals. Ethyl alcohol is a strong virucidal in concentrations of 60 to 80 percent, which disables all lipophilic (fat-loving) viruses such as influenza virus and many hydrophilic viruses (such as adenovirus, enterovirus, rhinovirus and rotavirus) but does not affect hepatitis A virus or polio virus. Isopropyl alcohol is not active against non-lipid-enveloped viruses but is fully active against lipid-enveloped viruses. Studies have also shown the ability of ethyl alcohol and isopropyl to disable hepatitis B virus (Source: CDC).

Phenolic disinfectants destroy cell membranes of microorganisms. They have bactericidal, fungicidal and virucidal effects, but are ineffective against bacteria such as Clostridium difficile. Due to the effectiveness rate of phenols, they are used to disinfect equipment and treatment rooms with low sensitivity. 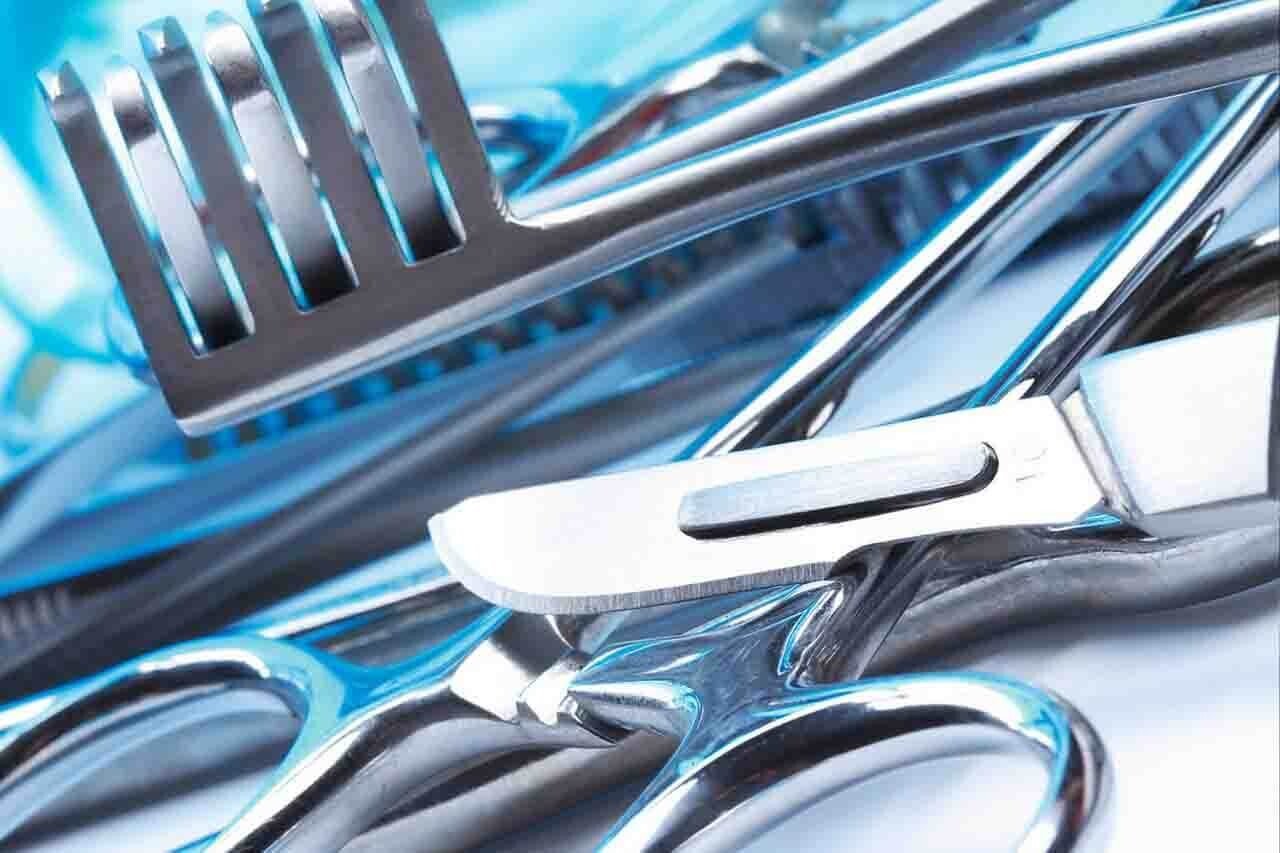 Quaternery ammonium compounds (QAC) are used for various clinical purposes such as preoperative and insensitive device disinfection as well as cleaning surfaces and removing odor from them. This disinfectant has antibacterial, antifungal and antiviral properties.

Chemical disinfectants used in hospitals are classified in three categories: high level, medium level and low level. Types with high level effects destroy many microbes. For this reason, they are commonly used in sensitive medical cases. Although types with low level effectiveness are widely used, they are only effective for cases which have low sensitivity from the medical perspective. Which disinfectant is the best depends on a variety of factors; from the type of environmental pollution and its sensitivity to the extent of its impact on medical staff. Knowing them and being familiarized with their performance can be a great help in choosing the best.

Silver nanoparticles are a powerful weapon against germs
Read More

Is it allowed to use disinfectant spray in flight?
Read More

Which Operating Room Disinfectant Do You Use The Most?
Read More