Cranioplasty is a type of complementary surgery to repair skull defects. With scientific advances, surgeons' materials and techniques have evolved. In this article, we review cranioplasty materials.

Cranioplasty is a type of complementary surgery to repair skull defects. In addition to beauty and reducing stress, the purpose of this surgery is to protect the brain. Throughout history, various materials have been used for cranioplasty. With scientific advances, surgeons' materials and techniques have evolved, and research on biological and non-biological alternatives is still ongoing to ideally develop the materials used in cranioplasty. In this article, we review these materials.

An example of a cranioplasty is a skull reshaping dating back to 2000 BC. The skull had a left forehead defect that had been corrected with a one-millimeter-thick gold plate. Of course, this showed that the sick person was rich. In the case of ordinary people in the community, squash was used to repair the skull. 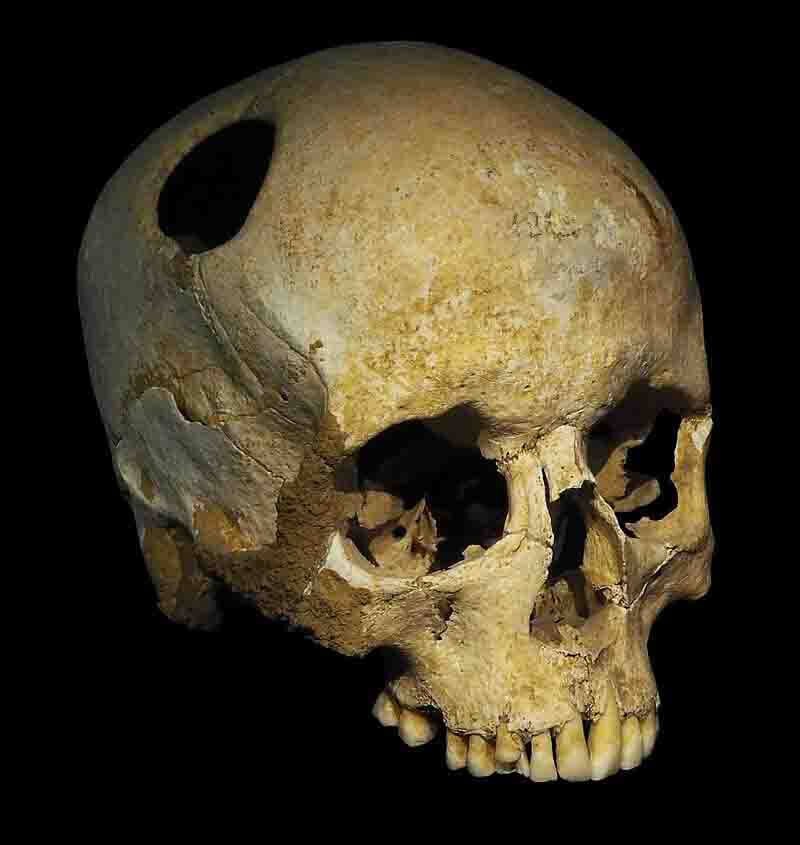 Together with the evolution of medical technology, more recent cranioplasty materials were used by surgeons, but what is essential is this material has unique properties. These features include:

Materials used in cranioplasty, along with the history

The cartilage of a corpse (allograft) was first used in 1915 for cranioplasty surgery. Considering that cartilage could well be molded and was resistant to infection, it was thought to work well. But later, it was found that it did not have enough resistance, and significant calcification did not occur. For this reason, allografts were inferior materials for cranioplasty. 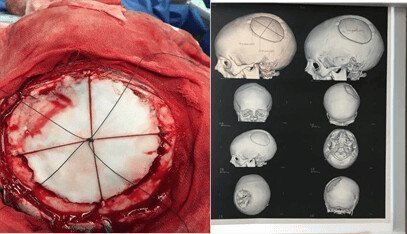 Autologous bone grafting was first performed through the skull flap in 1821, and in 1889 the tibia was used to cover a defect in the left parietal bone. In general, autologous bone flap replacement is traditionally preferred in cranioplasty. This method reduces the amount of foreign matter entering the body, and the skull bone readily accepts the bone flap. Although in the case of the tibia, it is not approved because two surgeries are needed, and bone fracture risk is high.

Metals have been used for surgery since ancient times. They are strong and sterile and have high flexibility. In the late 1800s, aluminum was one of the materials used in cranioplasty, but the metal was susceptible to infection; it was irritating surrounding tissues and causing inflammation. Gold was chosen as an alternative to aluminum. Gold had no tissue reaction but was expensive and soft. Silver was used in 1903, but silver oxide reacted with surrounding tissues and changed skin color. Also, the silver was soft. Tantalum replaced silver during World War II. Tantalum was also resistant to tissue reactions and being inert and non-absorbable, corrosion and infection. Still, it was challenging to prepare, expensive, and unfortunately, it was a good conductor of heat and caused heat transfer to the head, which gave a headache. That's why doctors were looking for another alternative. 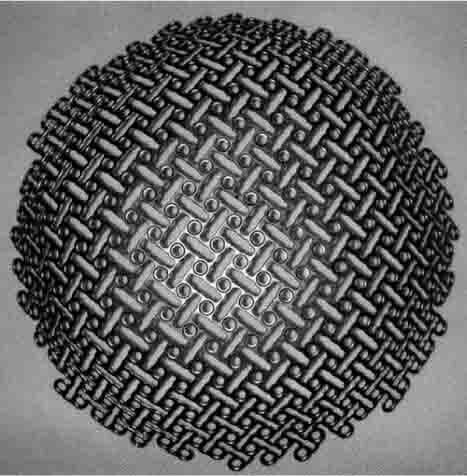 Methyl methacrylate (MMA) was discovered in 1939 and was extensively tested in the 1940s. MMA has better compressive and stress resistance than hydroxyapatite. It adheres to the Dora material without reacting in the underlying tissue, and it is heat resistant. Despite these advantages, methyl methacrylate is at risk for extrusion, decomposition, and infection, while the residual monomer from its cold polymerization may be toxic.

Problems with metals and other synthetic materials include the difficulty of being formed. In contrast, they inherently prevent brain CT scans, but hydroxyapatite is a compound of calcium phosphate that is naturally found in the bone as a mineral on the one hand. It artificially exists as ceramic, on the other hand. Unlike MMA, which does not allow the skull to grow in children, hydroxyapatite is entirely flexible, does not cause body parts to react to it as a foreign body, and adequately binds to the bone. Still, despite all the advantages, the use of hydroxyapatite is limited due to its fragility, low tensile strength, and high infection rate. 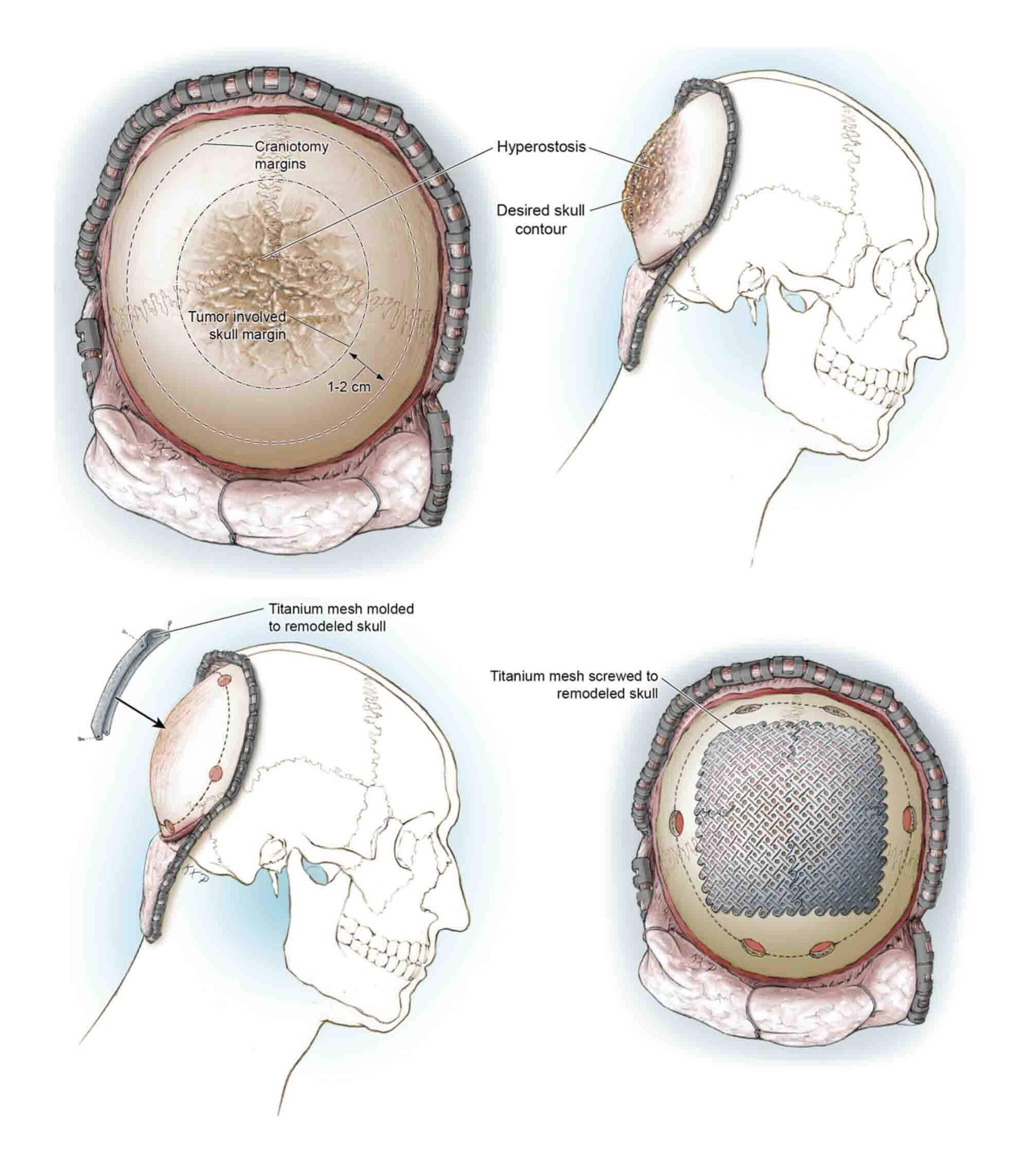 Titanium is a metallic alloy that is durable and highly flexible. This alloy is anti-corrosion and non-inflammatory. Its risk of infection is low. Titanium mesh is used as a cranioplasty material alone or other synthetic materials to strengthen the prosthesis.

Alumina ceramics have been used in cranioplasty surgery in recent decades due to their strength and aesthetic benefits. Ceramics are almost as hard as diamonds, chemically stable, and relatively compatible with acrylics. This cranioplasty material has a low rate of postoperative infection, but it needs to be custom-made, so it is expensive and prone to shredding. 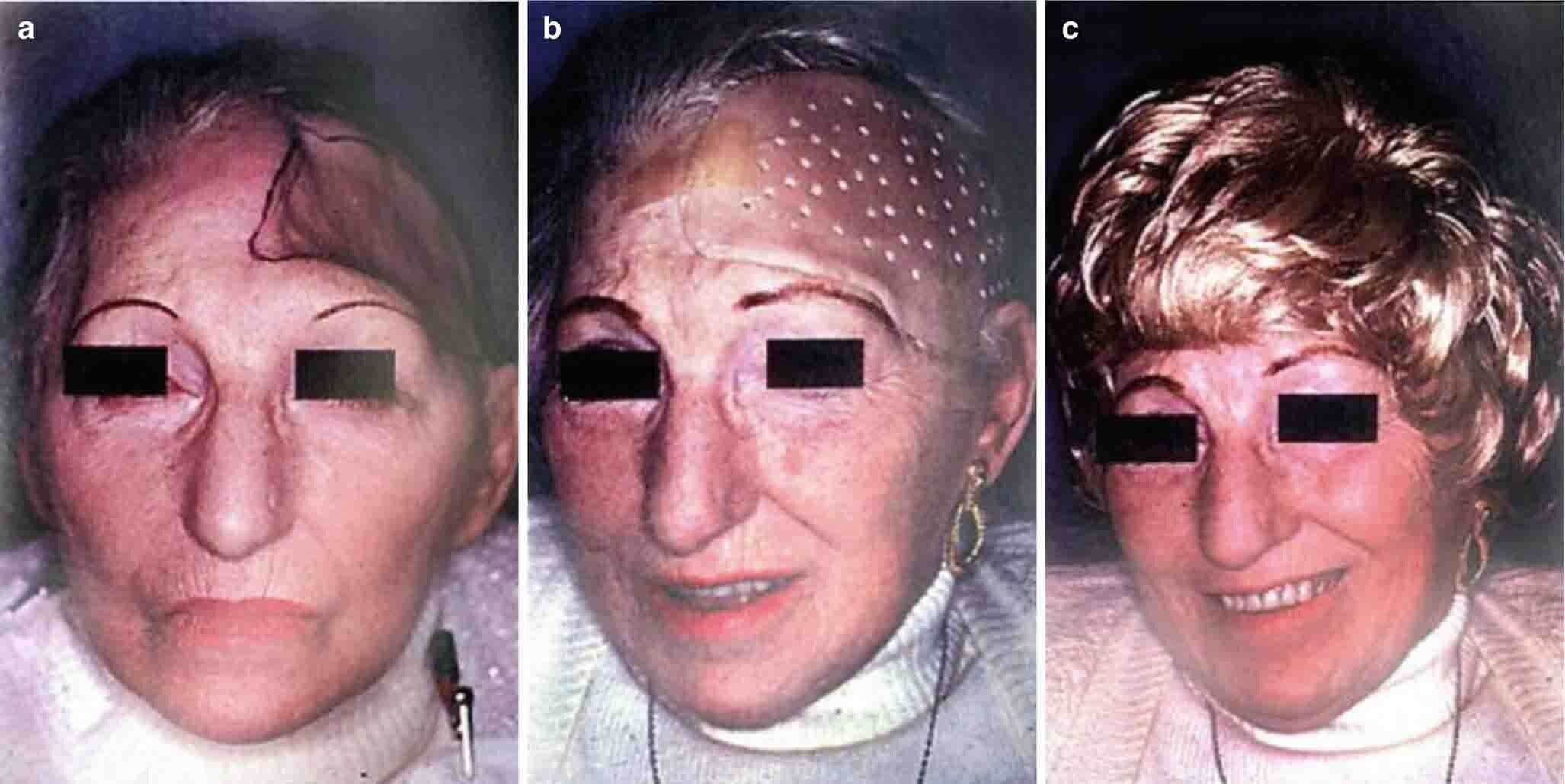 Polyetheretherketone is a semi-crystalline polymer that is chemically and radioactively inert. PEEK implants are comparable in strength, thickness, and elasticity to the cortical bone and are precisely placed inside them. To design these artificial implants, computer-aided three-dimension modeling can be used. PEEKs are transparent and non-magnetic against X-rays; they are made of lower density materials and weigh less while not heat conductors. On the other hand, they are expensive, do not have ossification properties, and may have contamination rates higher than those expected. Since PEEK does not mix with the surrounding bone, there is a risk of the implant detaching or extruding. 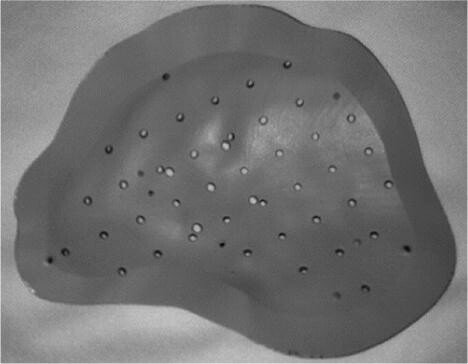 Which is the best cranioplasty material?

Although metals have been used for cranioplasty since ancient times, autologous bone grafting is now the preferred cranioplasty option. This type of graft reduces the entry of foreign matter into the body, and therefore, the bone flap is readily accepted and integrated by the host. Methyl methacrylate is one of the synthetic materials used in cranioplasty due to its excellent tensile strength. However, the susceptibility to fracture and infection rate have made it less durable in the long run. Newer technologies such as PEEK implants and titanium mesh are increasingly used today because they can specifically be designed for patient craniotomy defects using 3D printing technologies. Subsequent advances in cranioplasty have primarily included molecular biological approaches such as bone growth factors to aid in bone formation in grafts. Empirically, of course, there was no ideal material for cranioplasty. However, inexpensive, radioactive-resistant materials can be combined with the patient's incomplete craniotomy part to provide the most significant benefits for him/her.

The Symptoms, Treatment and Causes of Hemifacial Microsomia
soma zaidi